One of Hillary’s most ardent supporters, Democratic Senator Diane Feinstein, came on MSNBC to talk about how hurt Hillary Clinton has been since her loss to Donald Trump. Feinstein, famous for her efforts on gun control and saying in 1995 “Mr. and Mrs. America, Turn Them All In!”

Feinstein had what she called a “very quiet dinner” with Hillary Clinton and said “I think it’s fair to say, she’s hurting”.

After practically popping the champagne early on election night, expecting to be announced the winner within a few hours of the polls closing, only to find out that you’ve wasted over a billion dollars on your campaign and you’ve lost to a man with no political experience, I suppose Hillary Clinton should be feeling a bit down in the dumps.  Although it should cheer up Clinton that she’s not in a jail cell…yet.

On a side note, has anyone noticed that Hillary Clinton has always been seen wearing purple at her public events since the election, starting with her concession speech the day after?  She claims that she is wearing purple to represent the coming together of the Blue and Red political parties, but somehow she doesn’t strike me as the type of person to want to “build bridges” between herself and Donald Trump. 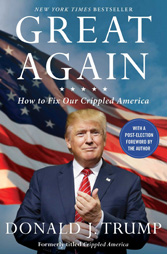