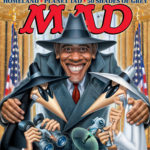 Although the revelation that the FBI under the Obama administration had overseen surveillance of communications within Donald Trump’s campaign is already well know, it now appears that their spying did not end at simply “wiretapping”, but may have had an embedded spy feeding them information on specific members of the Trump campaign. Kimberly Strassel of […]