After seeing pictures of liberals and far-left activists having meltdowns or becoming violent during last year’s election, and especially since Donald Trump took office, a common question has emerged among many who witness these outburst Why does there seem to be a similar appearance of weakness, lake of muscle mass and general look of being unhealthy among the most violent of anti-Trump protesters?

Perhaps the best example of the stereotypical social justice warrior and violent anti-Trump activist comes from none other than Tim Kaine’s son, Woody, who along with 4 fellow protesters was arrested in March for attacking Trump supporters.

Woody Kaine’s partners in crime may as well be “exhibit A” in the stereotypical appearance of social justice warriors and anti-Trump protesters:

The similarities do not end at radical anti-Trump protesters, but also extend to the media. Case in point, a lightweight dishrag of a reporter was reportedly thrown to the ground by Republican congressional candidate Greg Gianforte in Montana only a day before the special election. Ironically, this appeared to only increase his support among voters and he ended up easily winning the election.

Guardian reporter Ben Jacobs, the man who Gianforte alleged threw to the ground, perhaps portrays the very embodiment of a limp-wristed leftist millennial.

Particularly with liberal millennials who throw temper tantrums whenever Donald Trump tries to make America great again, they typically appear scrawny, trendy and generally unhealthy. Their weakness does not stop at their lack of muscle mass, but their inherent inability to accept ideas or outcomes that they do not agree with, often reacting as a small child would when they don’t get the toy they want.

Now, research has emerged from Brunel University, where a study was performed on 171 men, measuring everything from their strength, height, weight and even bicep circumference. What the university found was that the physically inferior men tended to be the ones who said they supported the redistribution of wealth.

Those who were physically stronger, however, were more likely to support capitalism and the idea of naturally dominant social groups.

Researchers attempted to explain these results by theorizing weaker men feel inferior and are more likely to seek outside forces for a feeling of safety.

“This is about our Stone Age brains, in a modern society,” explained the university’s own Michael Price. “Our minds evolved in environments where strength was a big determinant of success. If you find yourself in a body not threatened by other males, if you feel you can win competitions for status, then maybe you start thinking inequality is pretty good.”

“Of course this isn’t rational in modern environments, where your ability to win might have more to do with where you went to university,” he added. “Lots of guys who are phenomenally successful in modern societies would probably be nowhere near as successful in hunter gatherer societies.”

Still, Price says, it’s pretty amazing to see how natural dominant instinct plays out in today’s society, where weaker guys appear to find a lot more value in others being forced to share the wealth.

Because of a radical liberal’s inherent physical and behavioral weaknesses, they feel they need stronger authorities to ensure their safety, thus their desire for big government or a “nanny state” to cater to their needs. They most likely gravitate towards radical anti-Trump groups and protests to feel supported by their numbers, as being surrounded by those who share their insecurities will make enable them to experience greater confidence.

They believe socialism and joining radical protest groups will even the playing field between their weakness and the fortitude of those who support President Trump.

In reality, a person of any physical prowess can improve themselves by a little healthy exercise and activities. They may never be as big as other men, but they can increase their confidence dramatically and possibly even reduce their destructive socialist beliefs.

These weaker individuals do not have to perform violent actions on those who have beliefs they feel threatened by, but rather they simply need to work on improving their own self-image, which will instill greater confidence and allow them to engage in healthy debate, rather than throwing temper tantrums when confronted with opposing ideas.

The mystery of why these radical anti-Trump protesters seem to share a similar appearance may be solved by the this study, but discovering a method to help these individuals realize the error in their ways is still hotly debated among conservatives and Trump supporters, as liberals tend to react based on their emotions rather than facts.

Hate Crimes Against Trump Voters and White Kids Suppressed, Despite Numerous Reports
Donald Trump on Russian Hacking Report: No Impact on Outcome of Election
Female Reporter Attacked by Migrants While Reporting on 'Suffering' in Italy 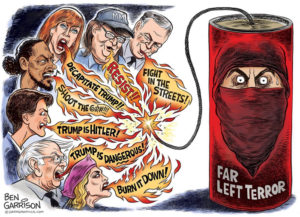 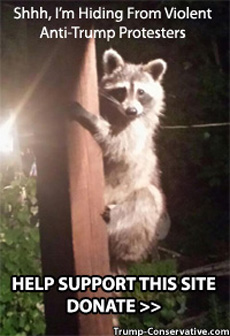